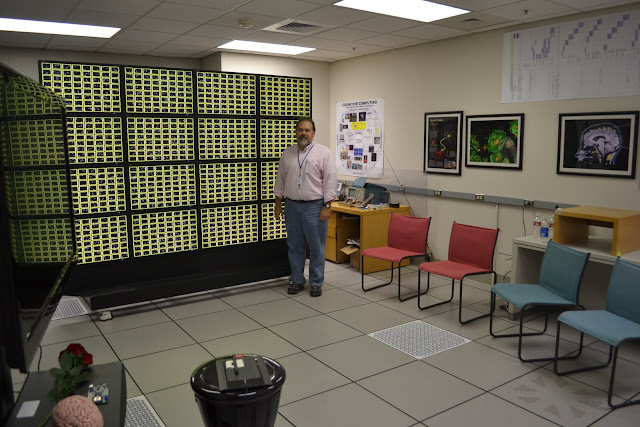 SyNAPSE technical project manager Bill Risk next to the "brain wall."
Each of the yellow boxes represents one of the cognitive computing chips (256 neurons),
and close up you'll see them blinking - these are neurons firing.

(August 18, 2011)  Today, IBM (NYSE: IBM) researchers unveiled a new generation of experimental computer chips designed to emulate the brain’s abilities for perception, action and cognition. The technology could yield many orders of magnitude less power consumption and space than used in today’s computers.

In a sharp departure from traditional concepts in designing and building computers, IBM’s first neurosynaptic computing chips recreate the phenomena between spiking neurons and synapses in biological systems, such as the brain, through advanced algorithms and silicon circuitry. Its first two prototype chips have already been fabricated and are currently undergoing testing.
Called cognitive computers, systems built with these chips won’t be programmed the same way traditional computers are today. Rather, cognitive computers are expected to learn through experiences, find correlations, create hypotheses, and remember – and learn from – the outcomes, mimicking the brains structural and synaptic plasticity.

To do this, IBM is combining principles from nanoscience, neuroscience and supercomputing as part of a multi-year cognitive computing initiative. The company and its university collaborators also announced they have been awarded approximately $21 million in new funding from the Defense Advanced Research Projects Agency (DARPA) for Phase 2 of the Systems of Neuromorphic Adaptive Plastic Scalable Electronics (SyNAPSE) project.