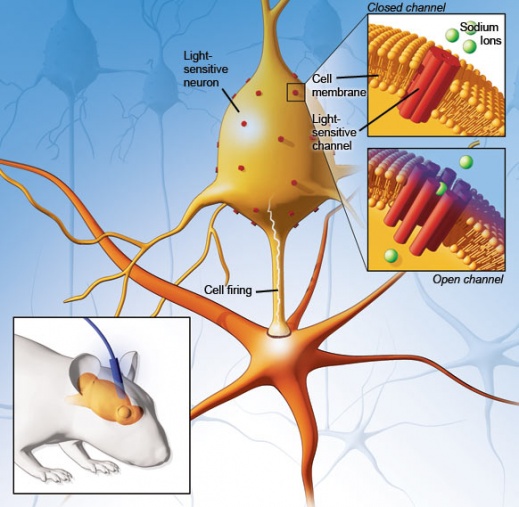 (October 27, 2010)  Ed Boyden is learning how to alter behavior by using light to turn neurons on and off.

The equipment in Ed Boyden’s lab at MIT is nothing if not eclectic. There are machines for analyzing and assembling genes; a 3-D printer; a laser cutter capable of carving an object out of a block of metal; apparatus for cultivating and studying bacteria, plants, and fungi; a machine for preparing ultrathin slices of the brain; tools for analyzing electronic circuits; a series of high-resolution imaging devices. But what Boyden is most eager to show off is a small, ugly thing that looks like a hairy plastic tooth. It’s actually the housing for about a dozen short optical fibers of different lengths, each fixed at one end to a light-emitting diode. When the tooth is implanted in, say, the brain of a mouse, each of those LEDs can deliver light to a different location. Using the device, Boyden can begin to control aspects of the mouse’s behavior.

Mouse brains, or any other brains, wouldn’t normally respond to embedded lights. But Boyden, who has appointments at MIT as eclectic as his lab equipment (assistant professor at the Media Lab, joint professor in the Department of Biological Engineering and the Department of Brain and Cognitive Sciences, and leader of the Synthetic Neurobiology Group), has modified certain brain cells with genes that make light-sensitive proteins in plants, fungi, and bacteria. Because the proteins cause the brains cells to fire when exposed to light, they give Boyden a way to turn the genetically engineered neurons on and off. 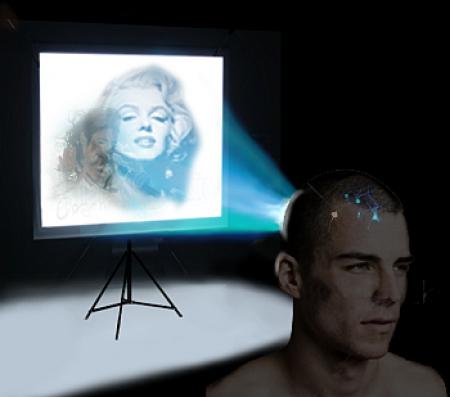 (October 27, 2010)  Five years ago, neuroscientist Christof Koch of the California Institute of Technology (Caltech), neurosurgeon Itzhak Fried of UCLA, and their colleagues discovered that a single neuron in the human brain can function much like a sophisticated computer and recognize people, landmarks, and objects, suggesting that a consistent and explicit code may help transform complex visual representations into long-term and more abstract memories.

Now Koch and Fried, along with former Caltech graduate student and current postdoctoral fellow Moran Cerf, have found that individuals can exert conscious control over the firing of these single neurons—despite the neurons' location in an area of the brain previously thought inaccessible to conscious control—and, in doing so, manipulate the behavior of an image on a computer screen.

I want to see what you see: Babies treat “social robots” as sentient beings 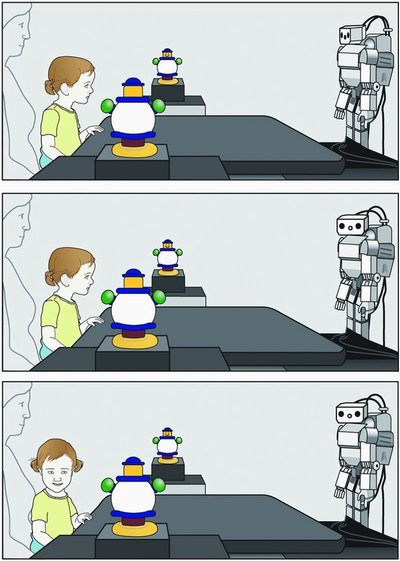 Neural Networks
Diagram of the test phase. Top panel: The baby sits across from the robot. Middle panel: Robot turns its “head” toward a toy. Babies who did not watch the robot play games with the researcher did not look to see where the robot looked. Bottom panel: Babies who had watched the robot play games with the researcher followed the robot’s “gaze.” They wanted to see what the robot was seeing.
Babies are curious about nearly everything, and they’re especially interested in what their adult companions are doing. Touch your tummy, they’ll touch their own tummies. Wave your hands in the air, they’ll wave their own hands. Turn your head to look at a toy, they’ll follow your eyes to see what’s so exciting. 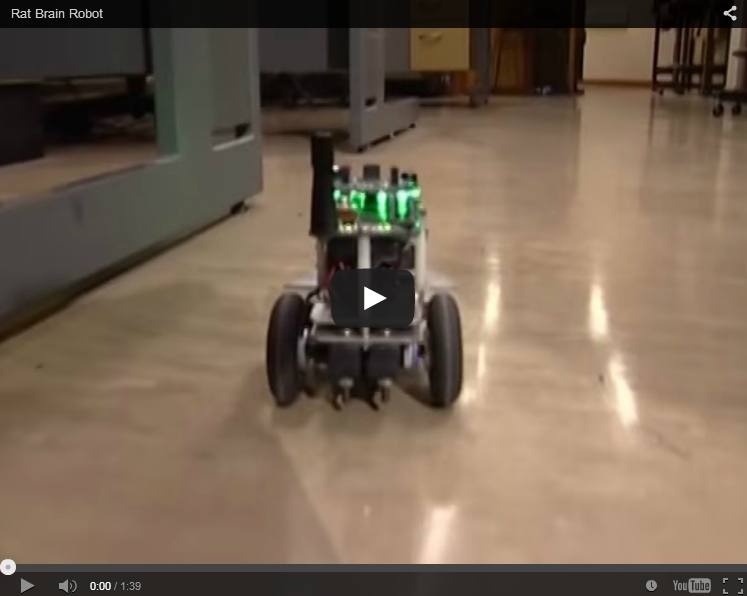 (October 6, 2010)  Some technologies are so cool they make you do a double take. Case in point: robots being controlled by rat brains. Kevin Warwick, once a cyborg and still a researcher in cybernetics at the University of Reading, has been working on creating neural networks that can control machines. He and his team have taken the brain cells from rats, cultured them, and used them as the guidance control circuit for simple wheeled robots. Electrical impulses from the bot enter the batch of neurons, and responses from the cells are turned into commands for the device. The cells can form new connections, making the system a true learning machine. Warwick hasn't released any new videos of the rat brain robot for the past few years, but the three older clips we have for you below are still awesome. He and his competitors continue to move this technology forward - animal cyborgs are real.

The skills of these rat-robot hybrids are very basic at this point. Mainly the neuron control helps the robot to avoid walls. Yet that obstacle avoidance often shows clear improvement over time, demonstrating how networks of neurons can grant simple learning to the machines. Whenever I watch the robots in the videos below I have to do a quick reality check - these machines are being controlled by biological cells! It's simply amazing.

How my predictions are faring — an update by Ray Kurzweil 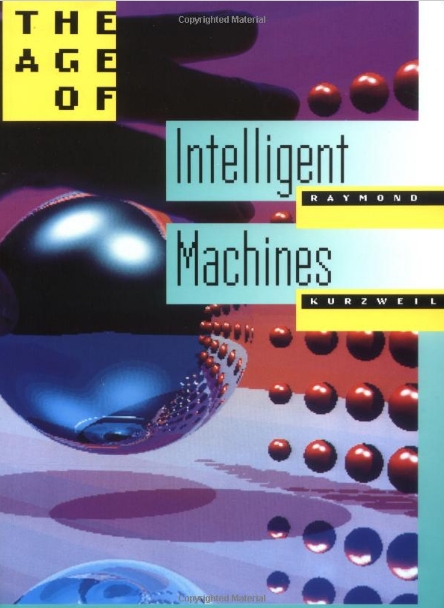 How My Predictions Are Faring | Overview

Perhaps my most important predictions are implicit in my exponential graphs. These trajectories have indeed continued on course and I discuss these updated graphs below.

My core thesis, which I call the law of accelerating returns, is that fundamental measures of information technology follow predictable and exponential trajectories, belying the conventional wisdom that you can’t predict the future.

There are still many things — which project, company or technical standard will prevail in the marketplace, or when peace will come to the Middle East — that remain unpredictable, but the underlying price/performance and capacity of information is nonetheless remarkably predictable. Surprisingly, these trends are unperturbed by conditions such as war or peace and prosperity or recession. 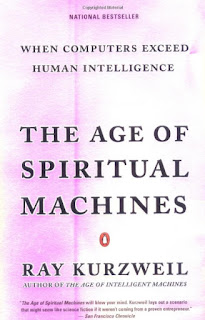 source of this essay >>