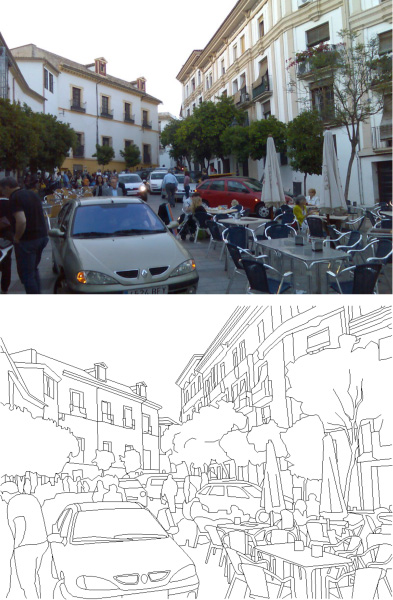 "Mind reading" scans show that, to our brains, a sparse line drawing of a street scene is almost as recognizable as a detailed color photograph.

(May 18, 2011)  Researchers call it mind reading. One at a time, they show a volunteer – who's resting in an MRI scanner – a series of photos of beaches, city streets, forests, highways, mountains and offices. The subject looks at the photos, but says nothing.

The researchers, however, can usually tell which photo the volunteer is watching at any given moment, aided by sophisticated software that interprets the signals coming from the scan. They glean clues not only by noting what part of the brain is especially active, but also by analyzing the patterns created by the firing neurons. They call it decoding.

Now, psychologists and computer scientists at Stanford, Ohio State University and the University of Illinois at Urbana–Champaign have taken mind reading a step further, with potential impact on how both computers and the visually impaired make sense of the world they see.