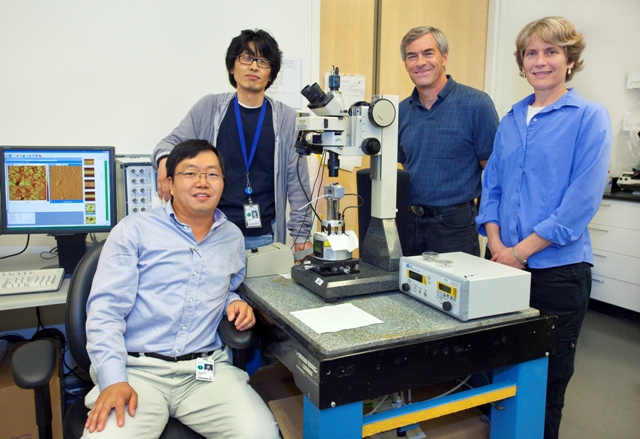 (September 22, 2010)  By assembling a crystalline envelope around a cell, surface-layer (S-layer) proteins serve as the first point of contact between bacteria, extremophiles and other types of microbes  and their environment.  Now, scientists at the Molecular Foundry, a nanoscience user facility at Berkeley Lab, have used atomic force microscopy to image in real time how S-layer proteins form crystals in a cell-like environment. This direct observation of protein assembly could provide researchers with insight into how  microorganisms stave off antibiotics or lock carbon dioxide into minerals.

“Many proteins self-assemble into highly ordered structures that provide organisms with critical functions, such as cell adhesion to surfaces, transformation of CO2 into minerals, propagation of disease, and drug resistance,” said James DeYoreo, Deputy Director of the Molecular Foundry. “This work is the first to provide a direct molecular-level view of the assembly pathway in vitro. Once this knowledge can be extended to assembly in a living system, it may lead to strategies for capitalizing on or interfering with these functions.”

Unraveling the pathway for S-layer formation allows scientists to investigate how bacteria or other microbes negotiate interactions with their environment. DeYoreo and colleagues employed in situ atomic force microscopy—a probe technique used to study a crystal’s surface in its natural setting with atomic precision—to watch S-layer proteins assemble from solution onto a flat, biological membrane called a lipid bilayer. Unlike classical crystal growth, in which atoms form into ordered ‘seeds’ and grow in size, the team showed S-layer proteins form unstructured blobs on the bilayers before transforming into a crystalline structure over the course of minutes.