Tech Industry Visionaries Foresee "Internet of Everything" at Marconi Symposium 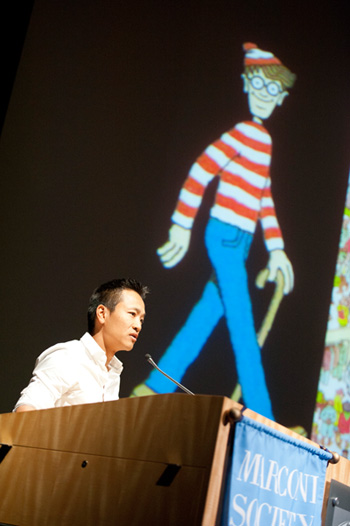 (September 28, 2011)  The "Internet of everything" has arrived, and according to a panel of prominent experts who assembled at the University of California, San Diego earlier this month for the 2011 Marconi Society Symposium, surfboards, dog collars and even tube socks will one day cross the digital divide and make for an increasingly Internet-enabled world.

This year's symposium, which was co-sponsored by the Center for Magnetic Recording Research and the UC San Diego division of the California Institute for Telecommunications and Information Technology (Calit2), explored the role that hardware (infrastructure) and software (applications) will play as the Internet evolves over the next several decades. The Marconi Society hosted the symposium in advance of its awards ceremony to recognize two scientists who–like radio inventor Guglielmo Marconi–pursued advances in communications and information technology for the social, economic and cultural development of all humanity. This year's winners of the Marconi Prize were former UCSD professors of electrical and computer engineering Jack Wolf and Irwin Mark Jacobs (Jacobs is also the co-founder of Qualcomm, Inc.). Speakers at this year's symposium included Jacobs and Google's Chief Internet Evangelist Vint Cerf, as well as Calit2 Senior Research Scientist Thomas A. DeFanti, Calit2 Research Scientist Albert Yu-Min Lin and several representatives from Bell Labs, Alcatel-Lucent and the University of Texas at Austin.