Scientists Steer Car with the Power of Thought 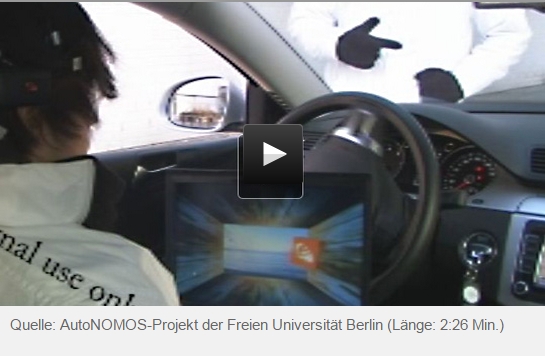 (February 17, 2011)  You need to keep your thoughts from wandering, if you drive using the new technology from the AutoNOMOS innovation labs of Freie Universität Berlin. The computer scientists have developed a system making it possible to steer a car with your thoughts. Using new commercially available sensors to measure brain waves – sensors for recording electroencephalograms (EEG) – the scientists were able to distinguish the bioelectrical wave patterns for control commands such as “left,” “right,” “accelerate” or “brake” in a test subject. They then succeeded in developing an interface to connect the sensors to their otherwise purely computer-controlled vehicle, so that it can now be “controlled” via thoughts. Driving by thought control was tested on the site of the former Tempelhof Airport.

The scientists from Freie Universität first used the sensors for measuring brain waves in such a way that a person can move a virtual cube in different directions with the power of his or her thoughts. The test subject thinks of four situations that are associated with driving, for example, “turn left” or “accelerate.” In this way the person trained the computer to interpret bioelectrical wave patterns emitted from his or her brain and to link them to a command that could later be used to control the car. The computer scientists connected the measuring device with the steering, accelerator, and brakes of a computer-controlled vehicle, which made it possible for the subject to influence the movement of the car just using his or her thoughts.