The Brain-Machine Connection: Humans and Computers in the 21st Century 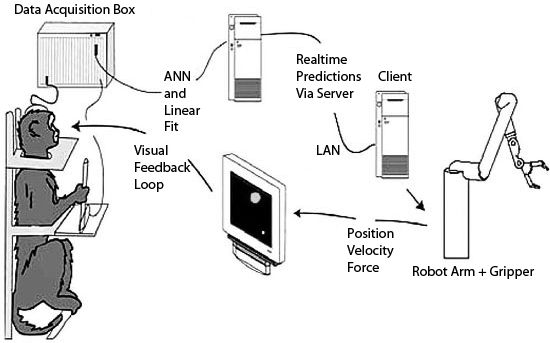 (February 13, 2011)  A bull is charging at full speed, riveted in its fury, straight at you. Rather than running for your life, you calmly flip a switch on a remote control you’re holding. Immediately, the bull halts its furious charge and awkwardly trots away. This sort of mind control is not science fiction – it was an actual experiment performed by one of the earliest practitioners of brain implants – José Delgado, a neurophysiologist at Yale University from 1946 to 1974.

Trained in the venerable tradition of neuroanatomists, José Delgado was a physiologist who primarily studied the neural anatomies of animals. After reading about how Nobel Prize-winning neurologist Walter Hess was able to induce various emotions through electrical stimulation, Delgado chose to further explore this concept. Over the next thirty years, he constructed increasingly sophisticated devices that would deliver measured electrical pulses to specific targets in the brain. For example, one of his innovations was a device known as a stimoceiver, a pacemaker-like device that could electrically stimulate a certain area of the brain when triggered by a remote electrical receiver. The device provided Delgado unprecedented control of an animal’s movement and emotional state. In his mind, the final purpose of these devices was to be able to control mental illnesses, such as schizophrenia or depression, by stimulating various parts of the brain, a less invasive and destructive alternative to a then-popular surgical procedure known as a lobotomy. Using this device, he dramatically demonstrated his control of behavior by stopping a charging bull just a few feet away.