Neuroprosthetics for paralysis: an new implant on the spinal cord 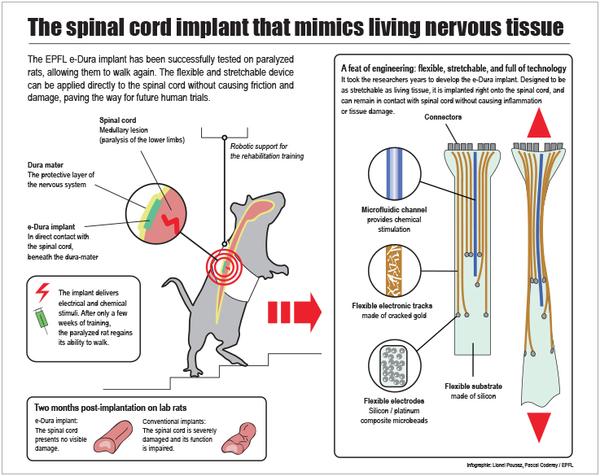 (January 8, 2015)  EPFL scientists have managed to get rats walking on their own again using a combination of electrical and chemical stimulation. But applying this method to humans would require multifunctional implants that could be installed for long periods of time on the spinal cord without causing any tissue damage. This is precisely what the teams of professors Stéphanie Lacour and Grégoire Courtine have developed. Their e-Dura implant is designed specifically for implantation on the surface of the brain or spinal cord. The small device closely imitates the mechanical properties of living tissue, and can simultaneously deliver electric impulses and pharmacological substances. The risks of rejection and/or damage to the spinal cord have been drastically reduced. An article about the implant will appear in early January in Science Magazine.

So-called “surface implants” have reached a roadblock; they cannot be applied long term to the spinal cord or brain, beneath the nervous system’s protective envelope, otherwise known as the “dura mater,” because when nerve tissues move or stretch, they rub against these rigid devices. After a while, this repeated friction causes inflammation, scar tissue buildup, and rejection.