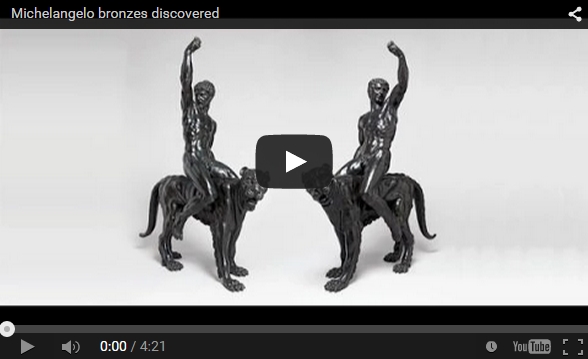 (February 2, 2015)  It was thought that no bronzes by Michelangelo had survived - now experts believe they have found not one, but two - with a tiny detail in a 500-year-old drawing providing vital evidence.

They are naked, beautiful, muscular and ride triumphantly on two ferocious panthers. And now the secret of who created these magnificent metre-high bronze male nudes could well be solved. A team of international experts led by the University of Cambridge and Fitzwilliam Museum has gathered compelling evidence that argues that these masterpieces, which have spent over a century in relative obscurity, are early works by Michelangelo, made just after he completed the marble David and as he was about to embark on the Sistine Chapel ceiling.

If the attribution is correct, they are the only surviving Michelangelo bronzes in the world.

They are a non-matching pair, one figure older and lithe, the other young and athletic. Long admired for the beauty of their anatomy and powerful expressions, their first recorded attribution was to Michelangelo when they appeared in the collection of Adolphe de Rothschild in the 19th century. But, since they are undocumented and unsigned, this attribution was dismissed and over the last 120 years, the bronzes have been attributed to various other talented sculptors.