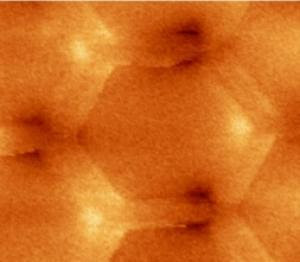 (March 31, 2012)  Honeycombs of magnets could lead to new type of computer processing

Scientists have taken an important step forward in developing a new material using nano-sized magnets that could ultimately lead to new types of electronic devices, with greater processing capacity than is currently feasible, in a study published today in the journal Science.

Many modern data storage devices, like hard disk drives, rely on the ability to manipulate the properties of tiny individual magnetic sections, but their overall design is limited by the way these magnetic 'domains' interact when they are close together.

Now, researchers from Imperial College London have demonstrated that a honeycomb pattern of nano-sized magnets, in a material known as spin ice, introduces competition between neighbouring magnets, and reduces the problems caused by these interactions by two-thirds. They have shown that large arrays of these nano-magnets can be used to store computable information. The arrays can then be read by measuring their electrical resistance.