METAL DETECTOR KNOWS HOW MUCH CASH IS IN YOUR WALLET 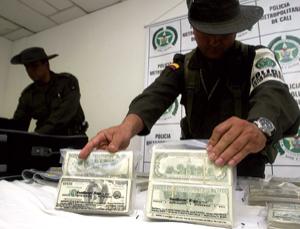 (March 30, 2012)  It has long been an urban legend that the security strips found in US banknotes let shadowy government agencies use metal detectors to track how much cash you are carrying.

Even though the strips are made of plastic, the legend is so pervasive it once made an appearance in an episode of TV series The X-Files. Now it seems the conspiracy theory may have been half right: it is possible to both detect and count concealed banknotes printed with magnetic inks.

These inks are already used by vending machines to verify the authenticity of a single note, but physicists Christopher Fuller and Antao Chen at the University of Washington in Seattle realised that large bundles of notes would contain enough magnetic material to be detected at a distance, potentially allowing police to catch people attempting to smuggle cash over the border.