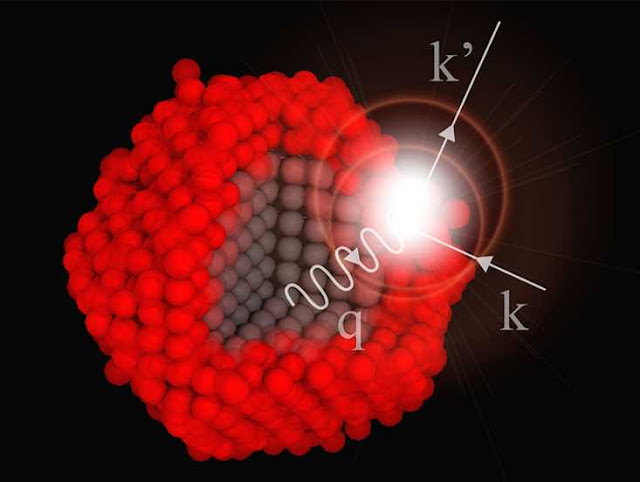 Vibrations of atoms in materials, the "phonons", are responsible for how
electric charge and heat is transported in materials. (Graphics: Deniz Bozyigit / ETH Zurich)

(March 10, 2016)  Researchers at ETH have shown for the first time what happens to atomic vibrations when materials are nanosized and how this knowledge can be used to systematically engineer nanomaterials for different applications.

All materials are made up of atoms, which vibrate. These vibrations, or "phonons", are responsible, for example, for how electric charge and heat is transported in materials. Vibrations of metals, semiconductors, and insulators in are well studied; however, now materials are being nanosized to bring better performance to applications such as displays, sensors, batteries, and catalytic membranes. What happens to vibrations when a material is nanosized has until now not been understood.

In a recent publication in Nature, ETH Professor Vanessa Wood and her colleagues explain what happens to atomic vibrations when materials are nanosized and how this knowledge can be used to systematically engineer nanomaterials for different applications.

The paper shows that when materials are made smaller than about 10 to 20 nanometers - that is, 5,000 times thinner than a human air – the vibrations of the outermost atomic layers on surface of the nanoparticle are large and play an important role in how this material behaves.
“For some applications, like catalysis, thermoelectrics, or superconductivity, these large vibrations may be good, but for other applications like LEDs or solar cells, these vibrations are undesirable,” explains Wood.