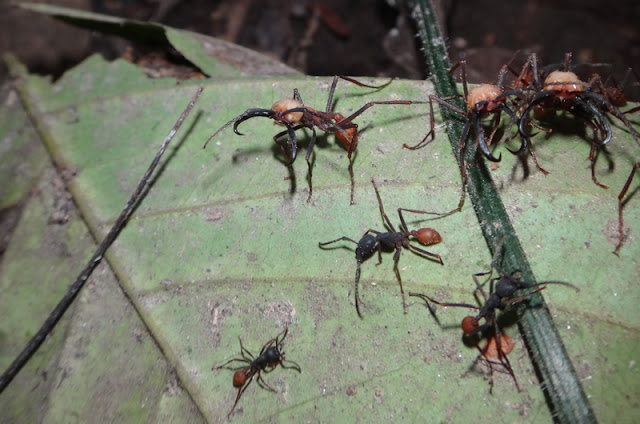 Eciton burchellii ants, among the above-ground species that appeared
to regrow the parts of the brain used for sight.

(March 9, 2016) A change to a more challenging environment could, over time, re-ignite and grow old parts of the brain that have gone inactive, according to a study of army ants led by a Drexel biology professor.

Sean O’Donnell, PhD, professor in the College of Arts and Sciences, studied several genera (groups of related species) of tropical army ants whose ancestors moved to living mostly underground almost 80 million years ago. The army ant species that continued to live underground appeared to have lost most, if not all, of their vision, but the genus Eciton appeared to gain back sight after returning to live on the surface about 18 million years ago. 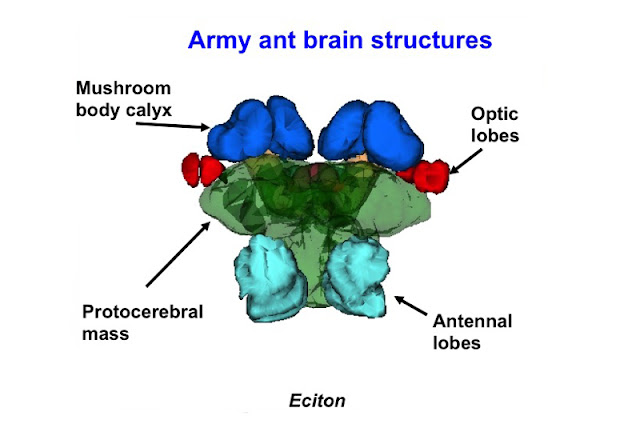 A diagram depicting the different sections of an ant's brain.

“Most of the known examples of changes in brain investment involve shifts to simpler or ‘reduced’ environments,” O’Donnell said. “Classic examples are cases of light-living surface species giving rise to dark-living cave-dwellers. These are frequently — almost always — associated with reduced vision-processing brain regions.”

But some of the ants that O’Donnell and his research partners studied appeared to grow back parts of the brain used in seeing. It appeared to be a rare example of a species’ brain tissue increasing over time following a move to a more complex environment. 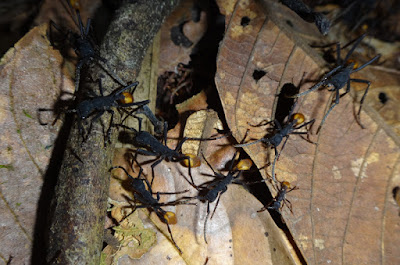 Eciton rapax, another variety of the ants who seemed to evolve to regrow the sight
centers of their brains after returning to the surface millions of years ago.

“Our data on visual investment suggest there is at least some room to regain or increase lost sensory and cognitive function,” O’Donnell said. “We don’t yet know how well Eciton can see and how their eyes work.  We found anatomical suggestions that their eye structure is distinct from most other above-ground insects. Have Eciton reinvented the eye to some extent?”

O’Donnell, along with four co-authors, recently published their findings in “Into the black, and back: The ecology of brain investment in Neotropical army ants” in The Science of Nature.