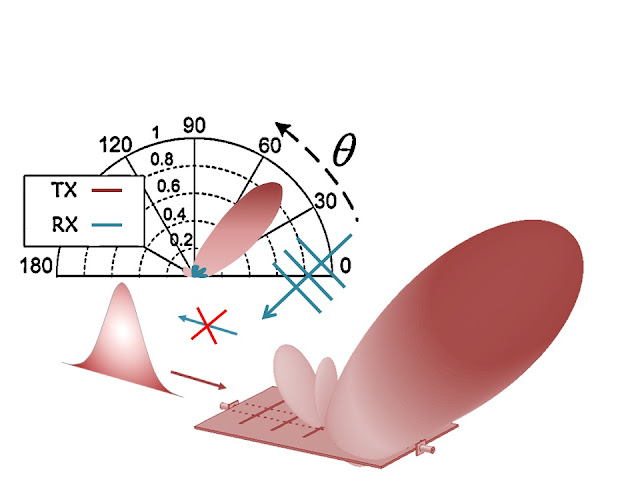 Associate professor Andrea Alù and his team have designed a non-reciprocal antenna
that can independently control incoming and outgoing radio-wave signals with greater
efficiency. Cockrell School of Engineering

(March 14, 2016)  Researchers in the Cockrell School of Engineering at The University of Texas at Austin have designed an antenna that is able to process incoming and outgoing radio-wave signals more efficiently and without the need for separate bulky and expensive electrical components commonly used in antenna systems. This new technology could lead to significantly faster, cheaper and clearer telecommunications in the future.

Andrea Alù, associate professor in the Department of Electrical and Computer Engineering, along with postdoctoral fellows Yakir Hadad and Jason Soric, discuss their non-reciprocal antenna’s design and capabilities in the Proceedings of the National Academy of Sciences. Their article will be published online this month.

The research team’s breakthrough design is an antenna that can break reciprocity, or the natural symmetry in radiation that characterizes conventional antennas. In textbooks, the angular patterns for antenna transmission and reception have been assumed to be the same — if the antenna opens a door to let signals out, signals can come back through that same door and leak toward the source. By breaking reciprocity, the UT Austin researchers’ new antenna can independently control incoming and outgoing signals with large efficiency.

The main advantage of this technological advancement is the possibility of sending out a signal while keeping out noise and echoes that come back toward the antenna, enabling faster data rates and improved connections while requiring less bulky antenna systems. Beyond telecommunications, the new antenna technology may be applied to sensors used in applications as diverse as health care and weather tracking, allowing the sensors to pick up stronger signals for more accurate data collection.