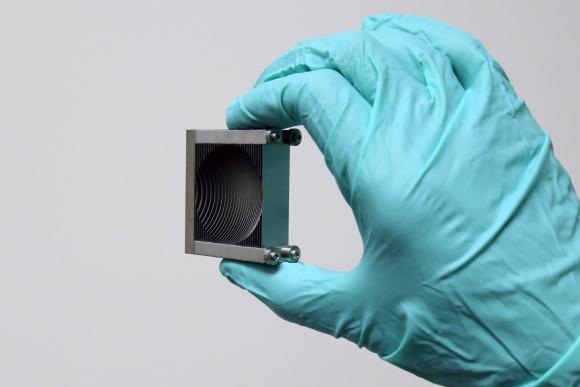 A terahertz lens
Researchers have used an array of stacked plates to make a lens for terahertz radiation.
The technique could set stage for new types of components for manipulating terahertz waves.
Mittleman lab / Brown University

(March 14, 2016)  Brown University engineers have devised a way to focus terahertz radiation using an array of stacked metal plates, which may prove useful for terahertz imaging or in next-generation data networks.

Terahertz radiation is a relatively unexplored slice of the electromagnetic spectrum, but it holds the promise of countless new imaging applications as well as wireless communication networks with extremely high bandwidth. The problem is that there are few off-the-shelf components available for manipulating terahertz waves.

Now, researchers from Brown University’s School of Engineering have developed a new type of lens for focusing terahertz radiation (which spans from about 100 to 10,000 GHz). The lens, made from an array of stacked metal plates with spaces between them, performs as well or better than existing terahertz lenses, and the architecture used to build the device could set the stage for a range of other terahertz components that don’t currently exist.

“Any photonic system that uses terahertz – whether it’s in imaging, wireless communications or something else – will require lenses,” said Dan Mittleman, professor of engineering at Brown and the senior author on the new paper. “We wanted to look for new ways to focus terahertz radiation.”

Most lenses use the refractive properties of a material to focus light energy. Eyeglasses, for example, use convex glass to bend visible light and focus it on a certain spot. But for this new terahertz lens, the properties of the materials used don’t matter as much as the way in which the materials are arranged.