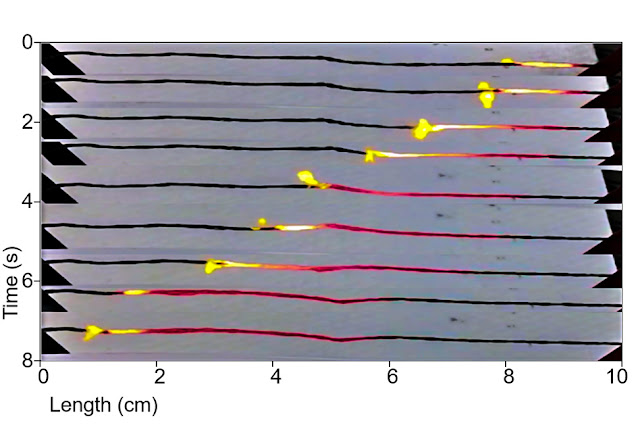 In this time-lapse series of photos, progressing from top to bottom, a coating of sucrose
(ordinary sugar) over a wire made of carbon nanotubes is lit at the left end, and burns from
one end to the other. As it heats the wire, it drives a wave of electrons along with it,
thus converting the heat into electricity. Courtesy of the researchers

The batteries that power the ubiquitous devices of modern life, from smartphones and computers to electric cars, are mostly made of toxic materials such as lithium that can be difficult to dispose of and have limited global supplies. Now, researchers at MIT have come up with an alternative system for generating electricity, which harnesses heat and uses no metals or toxic materials.

The new approach is based on a discovery announced in 2010 by Michael Strano, the Carbon P. Dubbs Professor in Chemical Engineering at MIT, and his co-workers: A wire made from tiny cylinders of carbon known as carbon nanotubes can produce an electrical current when it is progressively heated from one end to the other, for example by coating it with a combustible material and then lighting one end to let it burn like a fuse.

That discovery represented a previously unknown phenomenon, but experiments at the time produced only a minuscule amount of current in a simple laboratory setup. Now, Strano and his team have increased the efficiency of the process more than a thousandfold and have produced devices that can put out power that is, pound for pound, in the same ballpark as what can be produced by today’s best batteries. The researchers caution, however, that it could take several years to develop the concept into a commercializable product.

The new results were published in the journal Energy & Environmental Science, in a paper by Strano, doctoral students Sayalee Mahajan PhD ’15 and Albert Liu, and five others.