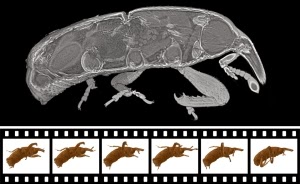 How does the hip joint of a crawling weevil move? A technique to record 3D X-ray films showing the internal movement dynamics in a spatially precise manner and, at the same time, in the temporal dimension has now been developed by researchers at ANKA, KIT’s Synchrotron Radiation Source. The scientists applied this technique to a living weevil. From up to 100,000 two-dimensional radiographs per second, they generated complete 3D film sequences in real time or slow motion.