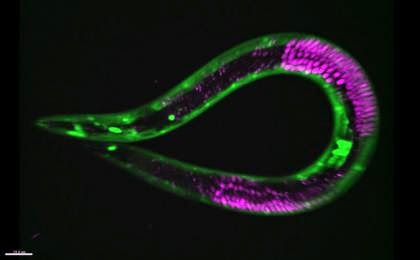 The centuries-long search for the fountain of youth has yielded only a few promising leads, one of which entails an extreme, emaciating diet. A new study of the tiny nematode worm C. elegans begins to explain this marvel of calorie restriction and hints at an easier way to achieve longevity.

Researchers at Duke University found that taking food away from C. elegans triggers a state of arrested development: while the organism continues to wriggle about, foraging for food, its cells and organs are suspended in an ageless, quiescent state. When food becomes plentiful again, the worm develops as planned, but can live twice as long as normal.