Audi A7 'coasting' hybrid knows when to be quiet [w/video] 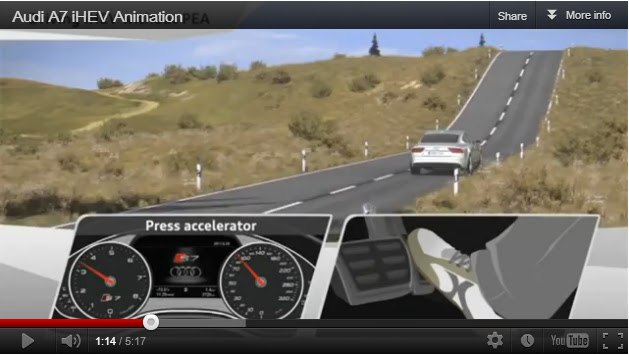 It looks like Audi is the latest automaker to equip a car with technology that makes humans look plain ol' dumb by comparison.

In this case, the German automaker is developing a so-called "coasting" hybrid, which is a variation of the stop-start feature being included in an expanding stable of vehicle models. In fact, the system is similar to what we saw on the Volkswagen Golf Twin Drive in 2008, but Audi uses a three-cylinder gas-powered TFSI engine instead of the four-cylinder diesel that was found in the Golf. A version of Twin Drive was developed for the Audi A3, as well.

The iHEV (Intelligent Hybrid Vehicle) is now being developed for the Audi A7 sedan, though the automaker hasn't said anything about timeframe, cost or availability.