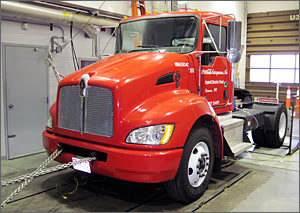 “During the on-road portion of our study, the hybrid vans demonstrated a 13 to 20 percent higher fuel economy than the conventional vans,” said NREL Project Engineer Michael Lammert. “During dynamometer testing, three standard drive cycles were chosen to represent the range of delivery routes. The hybrids showed a 13 to 36 percent improvement in fuel economy and up to a 45 percent improvement in ton-miles-per-gallon. This wide range in fuel economy is largely dependent on drive cycle.”