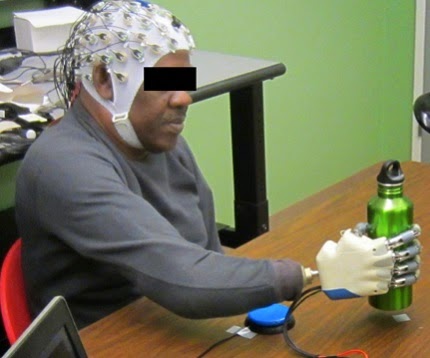 A research team from the University of Houston has created an algorithm that allowed a man to grasp a bottle and other objects with a prosthetic hand, powered only by his thoughts.

The technique, demonstrated with a 56-year-old man whose right hand had been amputated, uses non-invasive brain monitoring, capturing brain activity to determine what parts of the brain are involved in grasping an object. With that information, researchers created a computer program, or brain-machine interface (BMI), that harnessed the subject’s intentions and allowed him to successfully grasp objects, including a water bottle and a credit card. The subject grasped the selected objects 80 percent of the time using a high-tech bionic hand fitted to the amputee’s stump.