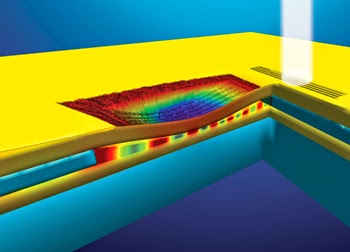 (April 1, 2015)  The name sounds like something Marvin the Martian might have built, but the “nanomechanical plasmonic phase modulator” is not a doomsday device. Developed by a team of government and university researchers, including physicists from the National Institute of Standards and Technology (NIST), the innovation harnesses tiny electron waves called plasmons. It’s a step towards enabling computers to process information hundreds of times faster than today’s machines.