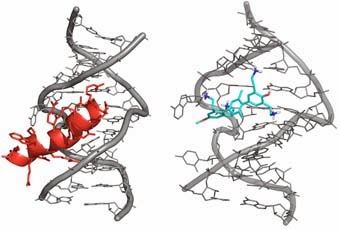 A multidisciplinary team of scientists from Spanish universities and research centres, among which the University of Valencia is, has managed to design small synthetic molecules capable of joining to the genetic material of the AIDS virus and block its replication.

This achievement has been obtained for the first time in the world by a group of researcher led by José Gallego. The University of Valencia, the Príncipe Felipe Research Centre, and the Instituto de Salud Carlos III have participated. The work has been recently published by Angewandte Chemie International Edition, one of the most prestigious scientific journals in the world in the area of Chemistry.