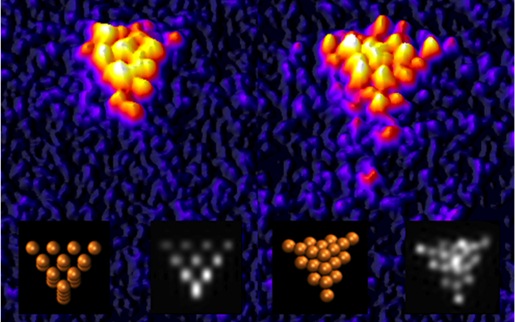 (July 26,  2012)  Scientists at the University of Birmingham have developed a method to visualise gold on the nanoscale by using a special probe beam to image 20 atoms of gold bound together to make a cluster. The research is published today (26 July 2012) in the Royal Society of Chemistry’s journal Nanoscale.


Physicists have theorised for many years how atoms of gold and other elements would be arranged and ten years ago the structure of a 20-atom tetrahedral pyramid was proposed by scientists in the US. Birmingham physicists can now reveal this atomic arrangement for the first time by imaging the cluster with an electron microscope.

Gold is a noble metal which is unreactive and thus resistant to contamination in our every day experience, but at the smallest, nano scale it becomes highly active chemically and can be used as a catalyst for controlling chemical reactions.