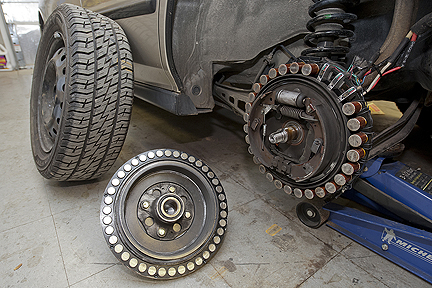 Powered by at least nine MTSU students’ work since 2008, Dr. Charles Perry continues driving toward success in the development of the plug-in hybrid retrofit kit for any car.

Perry, who holds the Russell Chair of Manufacturing Excellence, and a five-member team saw gas mileage increase anywhere from 50 to 100 percent on a 1994 Honda station wagon retrofitted with laboratory prototype plug-in hybrid capability.

Perry is now talking with several potential investors — companies with vehicle fleets — to solicit funds to build and demonstrate a manufacturing version of the plug-in hybrid technology.


The research Honda has been fitted with electric motors in each rear wheel and a large lithium-ion battery, which is mounted in the rear of the vehicle. As lithium-battery technology improves, Perry said, the battery size can be reduced in production models.

Switching on power to the two rear wheels’ electric motors made a huge difference by reducing the power required from the internal-combustion engine, he added.

“The whole point was to demonstrate the feasibility of adding the electrical motor to the rear wheel of the car without changing the brakes, bearings, suspension — anything mechanical,” Perry said.