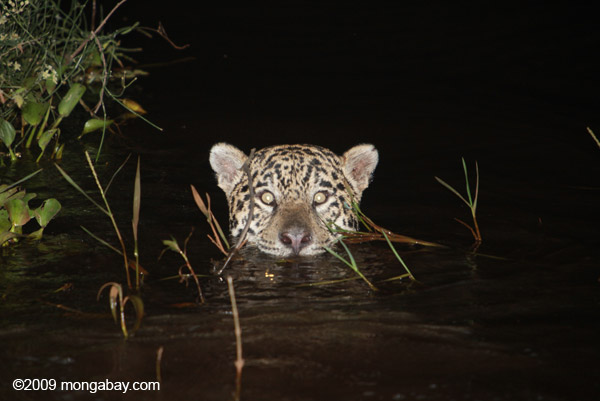 Jaguar in Brazil. A new study finds that apex predators, like the jaguar, are some of the
most sensitive to environmental degradation both inside and outside tropical forest parks.
Photo by: Rhett A. Butler.

(July 25, 2012)  Governments have set up protected areas, in part, to act as reservoirs for our Earth's stunning biodiversity; no where is this more true than in the world's tropical forests, which contain around half of our planet's species. However a new study in Nature finds that wildlife in many of the world’s rainforest parks remains imperiled by human pressures both inside and outside the reserves, threatening to undercut global conservation efforts. Looking at a representative 60 protected areas across 36 tropical nations, the scientists found that about half the parks suffered an “erosion of biodiversity” over the last 20-30 years.

“These reserves are like arks for biodiversity. But some of the arks are in danger of sinking,” said lead author, William Laurance, from James Cook University and the Smithsonian Tropical Research Institute, in a press release. “Even though they are our best hope to sustain tropical forests and their amazing biodiversity in perpetuity.”