Insights into protein folding may lead to better flu vaccine 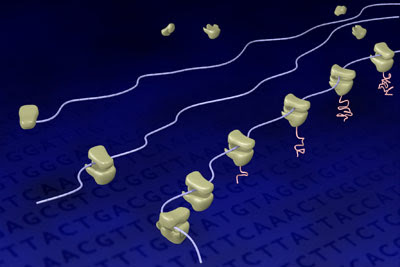 (July 2, 2012)  A new method for looking at how proteins fold inside mammal cells could one day lead to better flu vaccines, among other practical applications, say Cornell researchers.


The method, described online in the Proceedings of the National Academy of Sciences July 16, allows researchers to take snapshots of the cell's protein-making machinery -- called ribosomes -- in various stages of protein production. The scientists then pieced together the snapshots to reconstruct how proteins fold during their synthesis.

Proteins are made up of long chains of amino acids called polypeptides, and folding gives each protein its characteristic structure, which determines its function. Though researchers have used synthetic and purified proteins to study protein folding, this study looks at proteins from their inception, providing a truer picture for how partially synthesized polypeptides can fold in cells.

Proteins fold so quickly -- in microseconds -- that it has been a longtime mystery just how polypeptide chains fold to create the protein's structure.