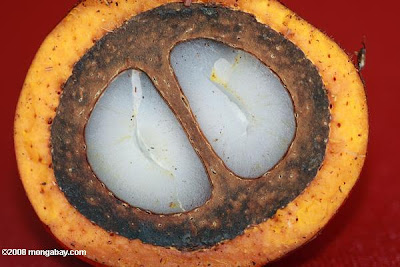 (July 25, 2012)  A campaign run by environmental activists has helped lead to a 64 percent reduction in palm oil use by eight major food companies in Norway, reports Rainforest Foundation Norway, which led the effort.

The campaign asked major food companies to disclose their palm oil use and whether palm oil was certified under the Roundtable on Sustainable Palm Oil (RSPO), an eco-certification initiative. Following the survey, the environmental groups published a ‘palm oil guide’ where consumers could look up the palm oil content in the products they buy. The effort went beyond traditional labeling which allowed palm oil to be listed generically as ‘vegetable oil’ or ‘vegetable fat’.