Artificial jellyfish swims in a heartbeat 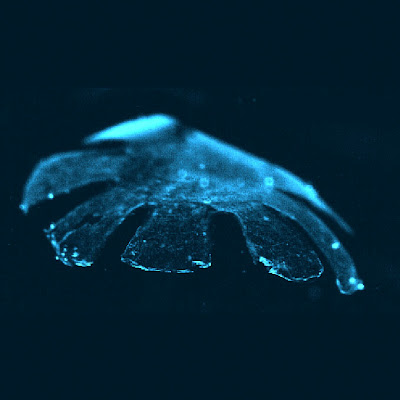 Creation is an amalgam of silicone polymer and heart muscle cells

(July 22, 2012)  Using recent advances in marine biomechanics, materials science, and tissue engineering, a team of researchers at Harvard University and the California Institute of Technology (Caltech) have turned inanimate silicone and living cardiac muscle cells into a freely swimming “jellyfish.”


The finding serves as a proof of concept for reverse engineering a variety of muscular organs and simple life forms. It also suggests a broader definition of what counts as synthetic life in an emerging field that has primarily focused on replicating life’s building blocks.

The researchers’ method for building the tissue-engineered jellyfish, dubbed “Medusoid,” was published in a Nature Biotechnology paper on July 22.

An expert in cell- and tissue-powered actuators, coauthor Kevin Kit Parker has previously demonstrated bioengineered constructs that can grip, pump, and even walk. The inspiration to raise the bar and mimic a jellyfish came out of his own frustration with the state of the cardiac field.

Similar to the way a human heart moves blood throughout the body, jellyfish propel themselves through the water by pumping. In figuring out how to take apart and then rebuild the primary motor function of a jellyfish, the aim was to gain new insights into how such pumps really worked.

“It occurred to me in 2007 that we might have failed to understand the fundamental laws of muscular pumps,” says Parker, Tarr Family Professor of Bioengineering and Applied Physics at the Harvard School of Engineering and Applied Sciences (SEAS) and a Core Faculty Member at the Wyss Institute for Biologically Inspired Engineering at Harvard. “I started looking at marine organisms that pump to survive. Then I saw a jellyfish at the New England Aquarium and I immediately noted both similarities and differences between how the jellyfish and the human heart pump.”