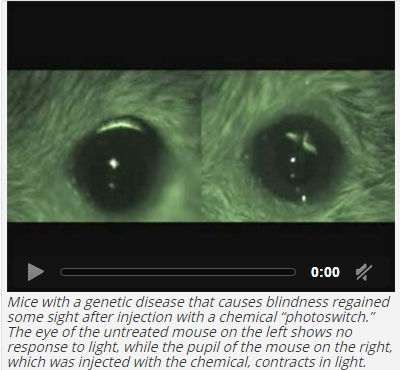 (July 26, 2012)  A team of University of California, Berkeley, scientists in collaboration with researchers at the University of Munich and University of Washington, in Seattle, has discovered a chemical that temporarily restores some vision to blind mice, and is working on an improved compound that may someday allow people with degenerative blindness to see again.


The approach could eventually help those with retinitis pigmentosa, a genetic disease that is the most common inherited form of blindness, as well as age-related macular degeneration, the most common cause of acquired blindness in the developed world. In both diseases, the light sensitive cells in the retina — the rods and cones — die, leaving the eye without functional photoreceptors.

The chemical, called AAQ, acts by making the remaining, normally “blind” cells in the retina sensitive to light, said lead researcher Richard Kramer, UC Berkeley professor of molecular and cell biology. AAQ is a photoswitch that binds to protein ion channels on the surface of retinal cells. When switched on by light, AAQ alters the flow of ions through the channels and activates these neurons much the way rods and cones are activated by light.

“This is similar to the way local anesthetics work: they embed themselves in ion channels and stick around for a long time, so that you stay numb for a long time,” Kramer said. “Our molecule is different in that it’s light sensitive, so you can turn it on and off and turn on or off neural activity.”