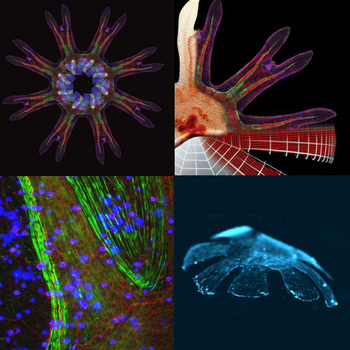 (July 22, 2012)  When one observes a colorful jellyfish pulsating through the ocean, Greek mythology probably doesn't immediately come to mind. But the animal once was known as the medusa, after the snake-haired mythological creature its tentacles resemble.


The mythological Medusa's gaze turned people into stone, and now, thanks to recent advances in bio-inspired engineering, a team led by researchers at the California Institute of Technology (Caltech) and Harvard University have flipped that fable on its head: turning a solid element—silicon—and muscle cells into a freely swimming "jellyfish."

Their method for building the tissue-engineered jellyfish, dubbed Medusoid, is outlined in a Nature Biotechnology paper that appears as an advance online publication on July 22.

"A big goal of our study was to advance tissue engineering," says Janna Nawroth, a doctoral student in biology at Caltech and lead author of the study. "In many ways, it is still a very qualitative art, with people trying to copy a tissue or organ just based on what they think is important or what they see as the major components—without necessarily understanding if those components are relevant to the desired function or without analyzing first how different materials could be used." Because a particular function—swimming, say—doesn't necessarily emerge just from copying every single element of a swimming organism into a design, "our idea," she says, "was that we would make jellyfish functions—swimming and creating feeding currents—as our target and then build a structure based on that information."