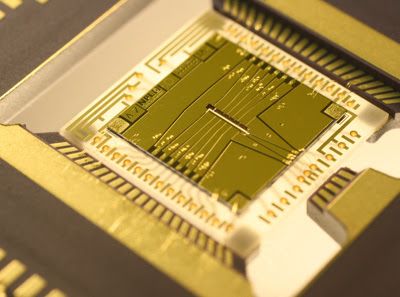 (July 24, 2012) Researchers in NPL's Quantum Detection Group have demonstrated for the first time a monolithic 3D ion microtrap array which could be scaled up to handle several tens of ion-based quantum bits (qubits). The research, published in Nature Nanotechnology, shows how it is possible to realise this device embedded in a semiconductor chip, and demonstrates the device's ability to confine individual ions at the nanoscale.


As the UK's National Measurement Institute, NPL is interested in how exotic quantum states of matter can be used to make high precision measurements of, for example, time and frequency, ever more accurate. This research, however, has implications wider than measurement. The device could be used in quantum computation, where entangled qubits are used to execute powerful quantum algorithms. As an example, factorisation of large numbers by a quantum algorithm is dramatically faster than with a classical algorithm.

Scalable ion traps consisting of a 2D array of electrodes have been developed, however 3D trap geometries can provide a superior potential for confining the ions. Creating a successful scalable 3D ion trapping device is based on maintaining two qualities - the ability to scale the device to accommodate increasing numbers of atomic particles, whilst preserving the trapping potential which enables precise control of ions at the atomic level. Previous research resulted in compromising at least one of these factors, largely due to limitations in the manufacturing processes.