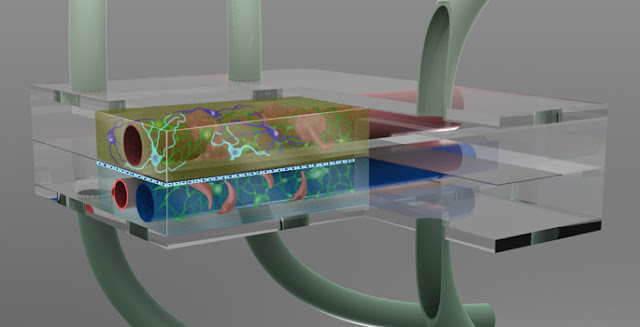 Artist’s conception of the microbrain bioreactor. The upper chamber contains the neurons
and an artificial capillary that carries blood to the brain surrounded by the cells that make up
the blood-brain barrier. The lower layer is filled with cerebral spinal fluid (CSF) and
contains an artificial choroid plexus (red) that makes CSF and a venule (blue) that carries
blood away from the brain, along with a collection of cells that form the blood-CSF and
CSF-brain barriers. Collectively, all these cells will reproduce the microenvironment
found in the brain. The entire device will be about the size of a grain of rice.
(Dominic Doyle and Frank Block / Vanderbilt)

(July 24, 2012)  Take a millionth of a human brain and squeeze it into a special chamber the size of a mustard seed. Link it to a second chamber filled with cerebral spinal fluid and thread both of them with artificial blood vessels in order to create a microenvironment that makes the neurons and other brain cells behave as if they were in a living brain. Then surround the chambers with a battery of sensors that monitor how the cells respond when exposed to minute quantities of dietary toxins, disease organisms or new drugs under development.

Creating such a “microbrain bioreactor” is the challenge of a new $2.1 million research grant awarded to an interdisciplinary team of researchers from Vanderbilt University, Vanderbilt University Medical Center, the Cleveland Clinic and Meharry Medical College. The grant is one of 17 that are being issued by the National Center for Advancing Translational Sciences at the National Institutes of Health as part of a $70 million “Tissue Chip for Drug Testing” program. The five-year program is a cooperative effort on the part of NIH, the Defense Advanced Research Projects Agency and the FDA.