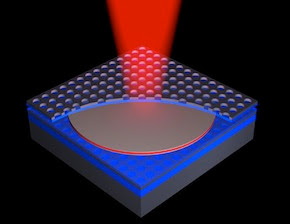 (July 22, 2012)  Electrical engineers at The University of Texas at Arlington and at the University of Wisconsin-Madison have devised a new laser for on-chip optical connections that could give computers a huge boost in speed and energy efficiency.


The team published its findings on July 22, 2012 in Nature Photonics.

At just 2 micrometers in height — smaller than the width of a human hair — the surface-emitting laser’s vastly lower profile could make it cheaper and easier for manufacturers to integrate high-speed optical data connections into the microprocessors powering the next generation of computers.

Traditionally, edge-emitter lasers are considered as the candidate for on-chip optical links. But since mirrors are hard to form in such lasers and because the lasers occupy a large chip area, researchers have been challenged to find a practical way to monolithically integrate the mirrors on silicon chips.

Surface-emitting lasers necessary for a high-speed optical links between computer cores could be 20 to 30 micrometers tall, slightly bigger than one hole in the mesh of a car’s oil filter. Yet the research team’s engineers say that on a 1.5-micrometer wavelength optically connected chip, lasers of that size dwarf their silicon surroundings.