AGRICULTURAL BACTERIA: BLOWING IN THE WIND 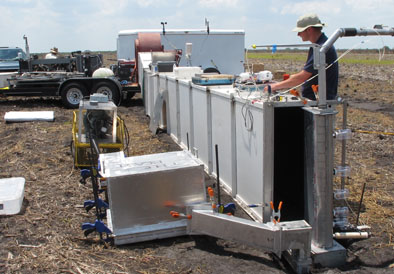 Agricultural Bacteria: Blowing in the Wind

It was all too evident during the Dust Bowl what a disastrous impact wind can have on dry, unprotected topsoil. Now a new study has uncovered a less obvious, but still troubling, effect of wind: Not only can it carry away soil particles, but also the beneficial microbes that help build soil, detoxify contaminants, and recycle nutrients.

Using a powerful DNA sequencing technique, called pyrosequencing, a team led by USDA-ARS scientists Terrence Gardner and Veronica Acosta-Martínez analyzed the bacterial diversity in three Michigan agricultural soils, and in two eroded sediments generated from these soils during a wind tunnel experiment: coarse particles and fine dust. Not only were the microbial assemblages on the coarse particles distinct from those on the dust, report the scientists in the current issue of the Journal of Environmental Quality, but the two types of eroded sediments were each enriched in certain groups of microbes compared with the parent soil, as well.

The findings suggest that specific bacteria inhabit specific locations in soil—and thus different groups and species can be carried away depending on the kinds of particles that erode. “It’s important to know which microbes are being lost from soil,” says Acosta-Martínez, a soil microbiologist and biochemist at the USDA-ARS Cropping Systems Laboratory in Lubbock, TX, “because different microbes have different roles in soil processes.”