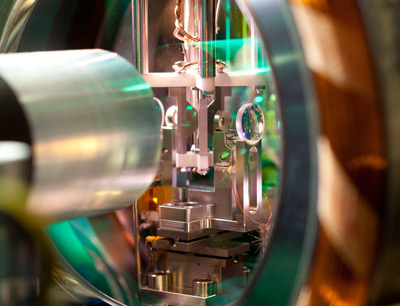 (May 24, 2012)  While several building blocks for a quantum computer have already been successfully tested in the laboratory, a network requires one additonal component: a reliable interface between computers and information channels. In the current issue of the journal Nature, physicists at the University of Innsbruck report the construction of an efficient and tunable interface for quantum networks.

Quantum technologies promise to redefine the landscape of information processing and communication. We already live in an information age, in which vast amounts of data are sent around the world over optical fibers, but future quantum networks may be many times more powerful. These networks will require interfaces that can transfer information from quantum processors onto light particles (photons). Such interfaces will allow optical fibers to transmit information-bearing photons between remote data registers, which are likely to be composed of quantum dots or ions. In contrast to classical information, quantum information can’t be copied without being corrupted. Instead, physicists around the world are searching for ways to transfer quantum information between matter and light using entanglement, the quantum property in which the state of one particle depends on the state of a second. Now, a research team led by Rainer Blatt, Tracy Northup, and Andreas Stute at the University of Innsbruck’s Institute for Experimental Physics has demonstrated the first interface between a single ion and a single photon that is both efficient and freely tunable.