ROBOTS THAT REVEAL THE INNER WORKINGS OF BRAIN CELLS 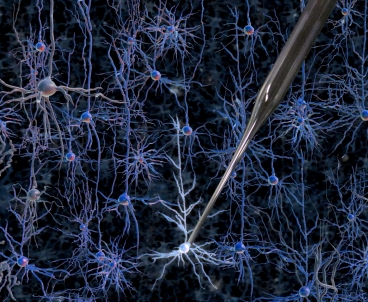 Robots that reveal the inner workings of brain cells

(May 7, 2012)  Gaining access to the inner workings of a neuron in the living brain offers a wealth of useful information: its patterns of electrical activity, its shape, even a profile of which genes are turned on at a given moment. However, achieving this entry is such a painstaking task that it is considered an art form; it is so difficult to learn that only a small number of labs in the world practice it.

But that could soon change: Researchers at MIT and Georgia Tech have developed a way to automate the process of finding and recording information from neurons in the living brain. The researchers have shown that a robotic arm guided by a cell-detecting computer algorithm can identify and record from neurons in the living mouse brain with better accuracy and speed than a human experimenter.

The new automated process eliminates the need for months of training and provides long-sought information about living cells’ activities. Using this technique, scientists could classify the thousands of different types of cells in the brain, map how they connect to each other, and figure out how diseased cells differ from normal cells.