A SIGNIFICIANT STEP TOWARD GRAPHENE-BASED ELECTRONICS 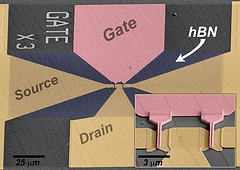 Research team's work may lead to breakthrough in microchip technology

(May 28, 2012)  Graphene is the wonder material that could solve the problem of making ever faster computers and smaller mobile devices when current silicon microchip technology hits an inevitable wall. Graphene, a single layer of carbon atoms in a tight hexagonal arrangement, has been highly researched because of its incredible electronic properties, with theoretical speeds 100 times greater than silicon. But putting the material into a microchip that could outperform current silicon technology has proven difficult.

The answer may lie in new nanoscale systems based on ultrathin layers of materials with exotic properties. Called two-dimensional layered materials, these systems could be important for microelectronics, various types of hypersensitive sensors, catalysis, tissue engineering and energy storage. Researchers at Penn State have applied one such 2D layered material, a combination of graphene and hexagonal boron nitride, to produce improved transistor performance at an industrially relevant scale.