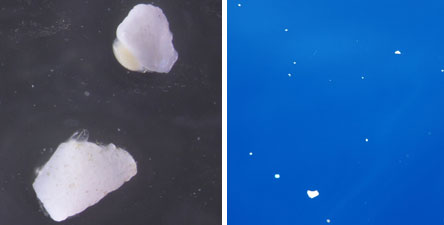 (May 8, 2012)   A 100-fold upsurge in human-produced plastic garbage in the ocean is altering habitats in the marine environment, according to a new study led by a graduate student researcher at Scripps Institution of Oceanography at UC San Diego.

In 2009 an ambitious group of graduate students led the Scripps Environmental Accumulation of Plastic Expedition (SEAPLEX) to the North Pacific Ocean Subtropical Gyre aboard the Scripps research vessel New Horizon. During the voyage the researchers, who concentrated their studies a thousand miles west of California, documented an alarming amount of human-generated trash, mostly broken down bits of plastic the size of a fingernail floating across thousands of miles of open ocean.

At the time the researchers didn't have a clear idea of how such trash might be impacting the ocean environment, but a new study published in the May 9 online issue of the journal Biology Letters reveals that plastic debris in the area popularly known as the "Great Pacific Garbage Patch" has increased by 100 times over in the past 40 years, leading to changes in the natural habitat of animals such as the marine insect Halobates sericeus.