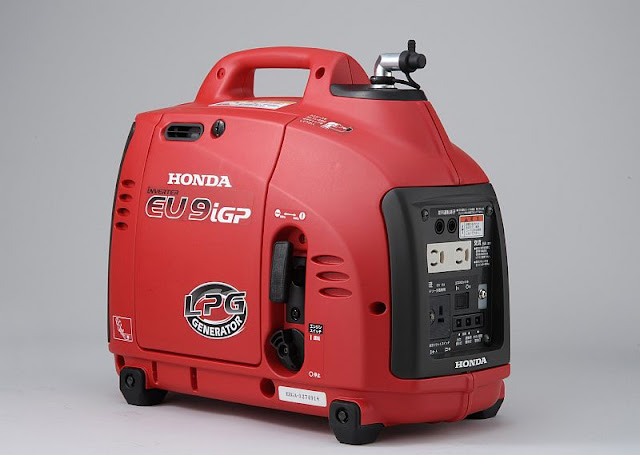 (April 30, 2012)  In what will be welcome news to many electricity-challenged Asian communities, Honda Motor Co has announced a portable generator capable of generating electricity by using propane gas which is far cleaner than the standard diesel or gasoline powered units.

The company will start to provide the generator to businesses that deal with liquefied petroleum gas (LPG) gas apparatuses in the summer of 2012.

Honda developed the generator based on the "EU9i," the company's existing generator that uses gasoline as fuel and has a rated output of 900VA. Consumer needs for private power generators that can be used in a time of emergency are increasing, particularly in Japan and China where a huge increase of power outages are expected this year.

The new generator uses propane gas, which is used for gas apparatuses in households throughout Asia and does not deteriorate much even when left unused for a long period of time. A gas container can be easily attached to the generator in emergency situations.

With 50kg of LP gas, the generator can be operated for about 100 hours. It is possible to connect two generators in parallel and realize a maximum output power of 1,800VA. Also, it can be used even in low-temperature environments (external temperature: -15°C) such as winter and nighttime.