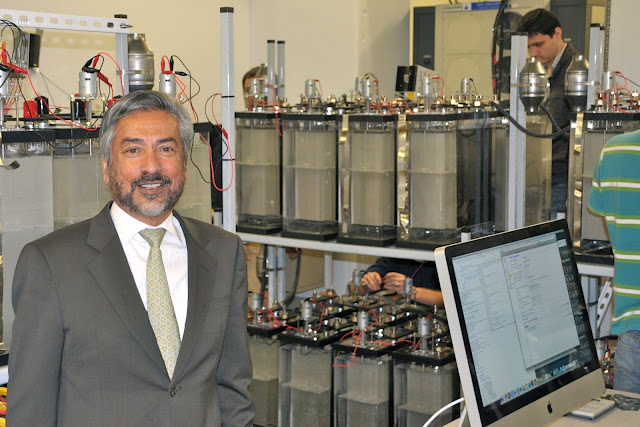 (May 7, 2012)  The CUNY Energy Institute, which has been developing innovative low-cost batteries that are safe, non-toxic, and reliable with fast discharge rates and high energy densities, announced that it has built an operating prototype zinc anode battery system. The Institute said large-scale commercialization of the battery would start later this year.

Zinc anode batteries offer an environmentally friendlier and less costly alternative to nickel cadmium batteries. In the longer term, they also could replace lead-acid batteries at the lower cost end of the market. However, the challenge of dendrite formation associated with zinc had to be addressed. Dendrites are crystalline structures that cause batteries to short out.

To prevent dendrite build-up, CUNY researchers developed a flow-assisted zinc anode battery with a sophisticated advanced battery management system (BMS) that controls the charge/discharge protocol. To demonstrate the new technology and its applications, which range from peak electricity demand reduction to grid-scale energy storage, they have assembled a 36 kilowatt-hour rechargeable battery system.

The system, housed in the basement of Steinman Hall on The City College of New York campus, consists of 36 individual one kWh nickel-zinc flow-assisted cells strung together and operated by the BMS.  In peak electricity demand reduction, batteries charge during low usage periods, i.e. overnight, and discharge during peak-demand periods when surcharges for power usage are very high.