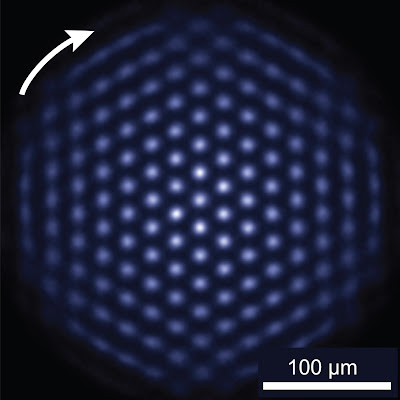 (May 2, 2012)  Physicists at the National Institute of Standards and Technology (NIST) have built a quantum simulator that can engineer interactions among hundreds of quantum bits (qubits)—10 times more than previous devices. As described in the April 26 issue of Nature*, the simulator has passed a series of important benchmarking tests and scientists are poised to study problems in material science that are impossible to model on conventional computers.

Many important problems in physics—especially low-temperature physics—remain poorly understood because the underlying quantum mechanics is vastly complex. Conventional computers—even supercomputers—are inadequate for simulating quantum systems with as few as 30 particles. Better computational tools are needed to understand and rationally design materials, such as high-temperature superconductors, whose properties are believed to depend on the collective quantum behavior of hundreds of particles.