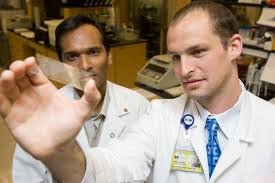 Drs. Scott Tomlins and Arul Chinnaiyan of the University of Michigan discovered a gene fusion abnormality
known as T2:ERG that is present in half of all prostate cancers and
is thought to be an initiator of this disease.
A new urine test, based in part on detecting T2:ERG,
is now available to aid in early detection of prostate cancer.

When scientists and doctors disagree over the finer points of our medical care, the best the rest of us can do is talk with our own doctors, read about the debate so we are as informed as possible, and perhaps do a bit of advocacy to fund the research needed to solve the debate. In May of last year, one such debate erupted when a group of physicians and scientists convened by the U.S. government to make health care recommendations for the general public changed course from prior years and called for an end to the routine use of a blood test that screens men for prostate cancer.