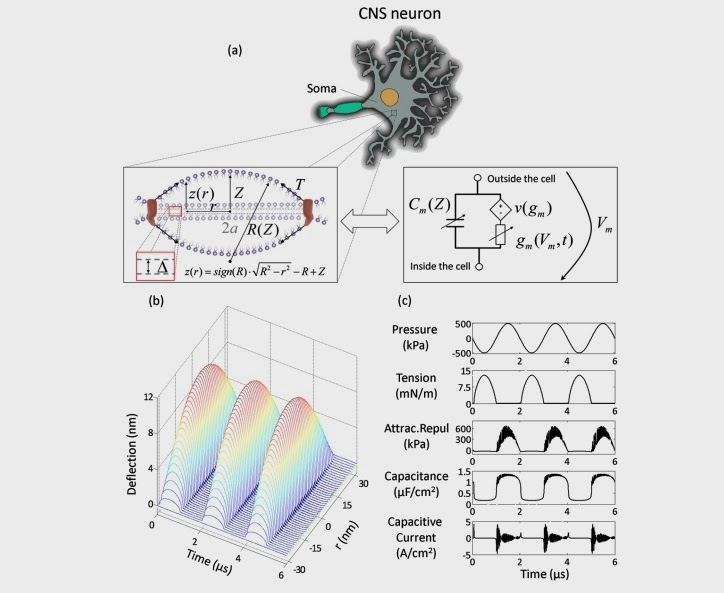 (January 21, 2014)  The brain is a reclusive organ. Neurons the cells that make up the brain, nerves, and spinal cord communicate with each other using electrical pulses known as action potentials, but their interactions are complicated and hard to understand. Just getting access to the brain itself is difficult: inserting devices through the skull into the brain requires surgery. But work by Technion Professors Eitan Kimmel and Shy Shoham, and Ph.D. student Misha Plaksin, may advance our ability to unlock the brain's secrets noninvasively using sound, and perhaps create new treatments for illnesses. The findings were published in Physical Review X

Scientists have known for a while that ultrasonic waves can affect cells in many ways. For instance, physicians use ultrasound to stimulate the production of blood vessels and bone; it’s also used in heat therapy. When applied to neurons, ultrasonic waves can change how the neurons generate and transmit electrical signals. “Ultrasound is known to do all kinds of things in cells,” says Prof. Kimmel, “but how it works in many cases isn’t clear, particularly when it comes to neural stimulation.”

A new model may help clarify much of this behavior. This new way of understanding the interaction of sound waves and cells relies on the cellular membrane. This microscopic structure is the skin that surrounds a cell, keeping the organelles – like the nucleus and the DNA it contains – in, and the rest of the world out. The molecules that form the membrane are arranged in such a way that there are two layers, with a space between them.