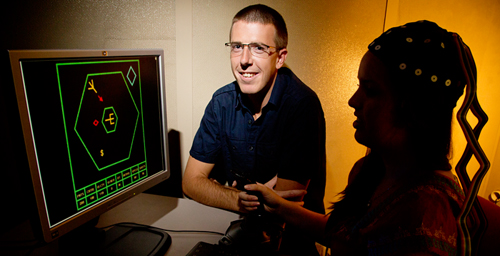 Scientists report that they can predict who will improve most on an unfamiliar video game by looking at their brain waves.

They describe their findings in a paper in the journal Psychophysiology.

The researchers used electroencephalography (EEG) to peek at electrical activity in the brains of 39 study subjects before they trained on Space Fortress, a video game developed for cognitive research. The subjects whose brain waves oscillated most powerfully in the alpha spectrum (about 10 times per second, or 10 hertz) when measured at the front of the head tended to learn at a faster rate than those whose brain waves oscillated with less power, the researchers found. None of the subjects were daily video game players.