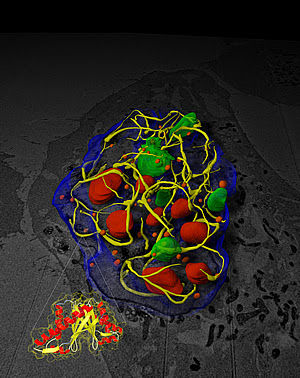 Cold viruses generally get a bad rap—which they've certainly earned—but new findings by a team of scientists at the Salk Institute for Biological Studies suggest that these viruses might also be a valuable ally in the fight against cancer.

Adenovirus, a type of cold virus, has developed molecular tools—proteins—that allow it to hijack a cell's molecular machinery, including large cellular machines involved in growth, replication and cancer suppression. The Salk scientists identified the construction of these molecular weapons and found that they bind together into long chains (polymers) to form a three-dimensional web inside cells that traps and overpowers cellular sentries involved in growth and cancer suppression. The findings, published October 11 in Cell, suggest a new avenue for developing cancer therapies by mimicking the strategies employed by the viruses.