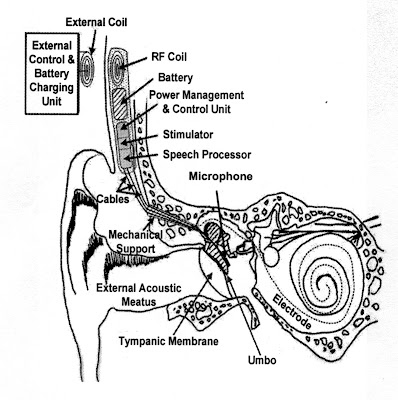 (April 30, 2012)  Cochlear implants have restored basic hearing to some 220,000 deaf people, yet a microphone and related electronics must be worn outside the head, raising reliability issues, preventing patients from swimming and creating social stigma.

Now, a University of Utah engineer and colleagues in Ohio have developed a tiny prototype microphone that can be implanted in the middle ear to avoid such problems.

The proof-of-concept device has been successfully tested in the ear canals of four cadavers, the researchers report in a study just published online in the Institute of Electrical and Electronics Engineers journal Transactions on Biomedical Engineering.

The prototype – about the size of an eraser on a pencil – must be reduced in size and improved in its ability to detect quieter, low-pitched sounds, so tests in people are about three years away, says the study’s senior author, Darrin J. Young, an associate professor of electrical and computer engineering at the University of Utah and USTAR, the Utah Science Technology and Research initiative.

The study showed incoming sound is transmitted most efficiently to the microphone if surgeons first remove the incus or anvil – one of three, small, middle-ear bones. U.S. Food and Drug Administration approval would be needed for an implant requiring such surgery.