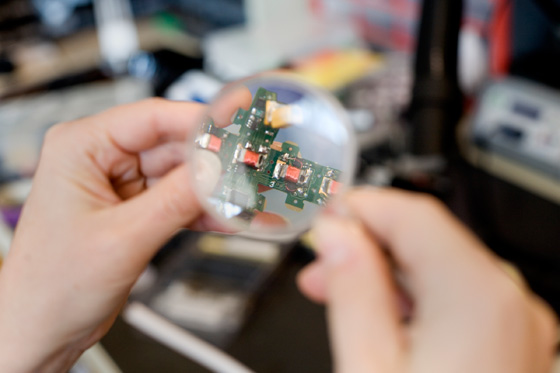 (April 3, 2012)  New algorithms could enable heaps of ‘smart sand’ that can assume any shape, allowing spontaneous formation of new tools or duplication of broken mechanical parts.


Imagine that you have a big box of sand in which you bury a tiny model of a footstool. A few seconds later, you reach into the box and pull out a full-size footstool: The sand has assembled itself into a large-scale replica of the model.

That may sound like a scene from a Harry Potter novel, but it’s the vision animating a research project at the Distributed Robotics Laboratory (DRL) at MIT’s Computer Science and Artificial Intelligence Laboratory. At the IEEE International Conference on Robotics and Automation in May — the world’s premier robotics conference — DRL researchers will present a paper describing algorithms that could enable such “smart sand.” They also describe experiments in which they tested the algorithms on somewhat larger particles — cubes about 10 millimeters to an edge, with rudimentary microprocessors inside and very unusual magnets on four of their sides.