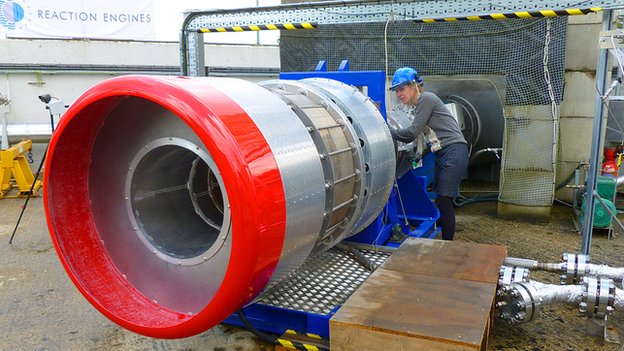 (April 27, 2012)  UK engineers have begun critical tests on a new engine technology designed to lift a spaceplane into orbit.

The proposed Skylon vehicle would operate like an airliner, taking off and landing at a conventional runway.

Its major innovation is the Sabre engine, which can breathe air like a jet at lower speeds but switch to a rocket mode in the high atmosphere.

This being so, the firm would then approach investors to raise the £250m needed to take the project into the final design phase.

"We intend to go to the Farnborough International Air Show in July with a clear message," explained REL managing director Alan Bond.

"The message is that Britain has the next step beyond the jet engine; that we can reduce the world to four hours - the maximum time it would take to go anywhere. And that it also gives us aircraft that can go into space, replacing all the expendable rockets we use today."