Children of long-lived parents less likely to get cancer 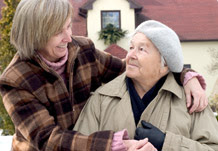 The offspring of parents who live to a ripe old age are more likely to live longer themselves, and less prone to cancer and other common diseases associated with ageing, a study has revealed.

Experts at the University of Exeter Medical School, supported by the National Institute for Health Research Collaboration for Leadership in Applied Health Research and Care in the South West Peninsula (NIHR PenCLAHRC), led an international collaboration which discovered that people who had a long-lived mother or father were 24% less likely to get cancer. The scientists compared the children of long-lived parents to children whose parents survived to average ages for their generation.